guest
14 Jun 2021
I was recommended this website by my cousin. I will be not sure whether this post is written by simply him as nobody else know such detailed ...

guest
6 Jun 2021
about Gowns Manufactures I'm extremely pleased to uncover this great site. I need to to thank you for ones time just for this wonderful ...

How to Draw Manga - Anime Clothing And Folds Drawing 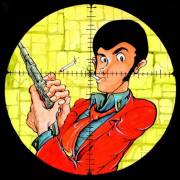 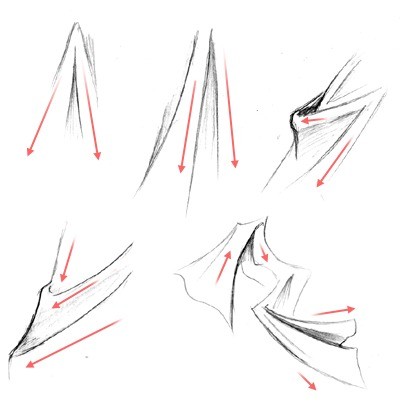 At the left are some examples of basic types of folds. Notice the movement of each example shown; the fabric flows downward on the top left two, for they are being pulled down by gravity. This type of fold would be on something that hangs loosely, such as a cape or long shirt. On the lower left and upper right examples, the fabric is not only pulled by gravity, but stretched to the left (probably by an arm that is underneath the clothing). The folds become more horizontal than vertical the further it is stretched. Also notice how sometimes the folds are nested within one another. This will often occur at joints or areas in which loose clothing is bunched up. The lower right picture is a slightly more complex example of a more inert piece of cloth being pulled in a viariety of directions. Notice how the folds follow the direction that the cloth is being pulled in.

Here are a few more examples of basic fold shapes. On the left, the cloth is being pulled downwards by gravity and to the right by wind or motion. 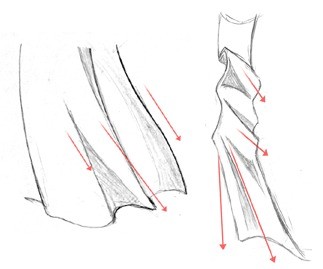 One the left, the long strip of cloth is bunched up near the top. Remember to use shading to give your subjects more form.
Generally, you shade along a fold line, or on any places that you think a shadow would be cast. This takes some getting used to. It helps to look at actual folds sometimes to see where to shade. Sometimes, I'll sketch the drapes or a towel hung over a chair just to practice and get a better feel for how clothing is shaded. 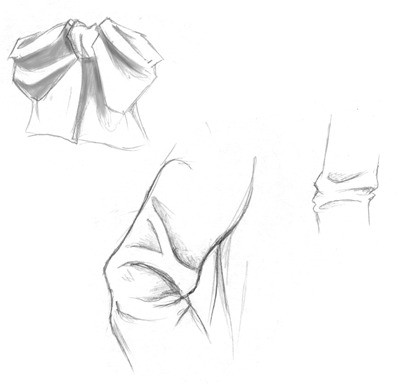 Here are a few more random examples, of a bow and some sleeves. The most important thing to note here is the shape of the folds at the joint of the sleeve in the middle. 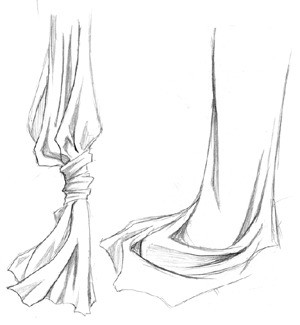 These are some more complex, overlapping and nested folds. The more detail you put into it the folds, the more interesting it will look. On the left, notice how the fabric bunches up where it is tied together; the weight of the fabric pulls it down and causes extra creases and folds to form where it is gathered together. The tie itself is drawn with lots of detail, and the cloth beneath it blows loosely in the wind.
The fabric is shaded around the folds and in the crevasses formed by the cloth. On the picture to the right, a length of fabric is draped upon the floor; notice how the folds nest in one another and overlap, creating an interesting effect. 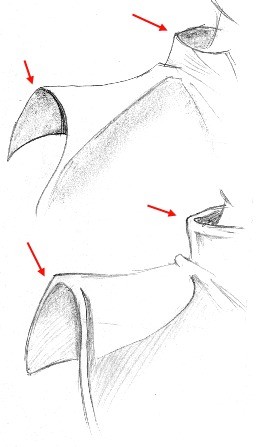 Another thing I want to point out is the thickness of the fabric in question. The fabric on the top example appears thinner than the fabric in the lower example. Take note of both collars. On the top, the circular rim of the collar connects directly to the rest of the collar, while on the bottom, there is a space between the circular rim and the vertical part. The same applies to the edges of the cape. While on the top example, the edge is crisp and thin, on the bottom example there is extra space between the rim and the rest of the cape. This extra space makes the clothing look more thick and heavy. 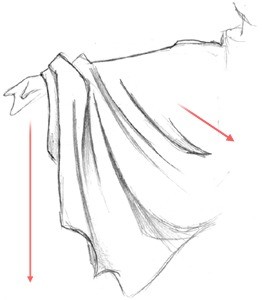 Now that we know a few of the basic shapes of folds in fabric, let's move on and see how clothing should look when it is actually being worn by someone. At the left, we have an example of a very loose, draping sleeve. As mentioned before, the main thing to consider is which direction the fabric will be pulled. The sleeve here is being pulled in two main directions: downwards because its pulled by gravity, and to the left because its attached to the main garment and is being stretched across the arm and torso. The folds in the sleeve will follow the direction that the cloth is being pulled. Notice also how the cloth bunches up around the wrist. This isn't necessary, but it does indicate the length and looseness of the sleeve. 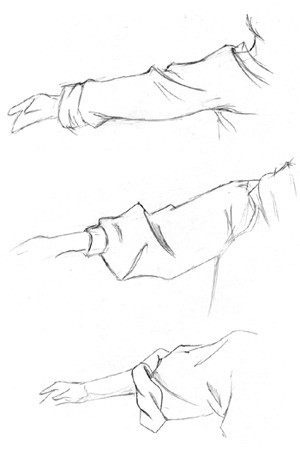 Here are three more sleeve examples.
These sleeves are not as loose as the one shown above, and all stick pretty close to the arm. In these examples, the cloth is stretched from the arm to the shoulder and torso, rather than being pulled down mainly by gravity. There isn't enough material to be pulled down too greatly. Since the fabric is pulled horizontally, the folds should reflect this. The best example is the top picture here; notice how the folds move towards the shoulder instead of towards the ground. The sleeve in the middle picture is a little looser, and is pulled down by gravity more. The sleeve in bottom picture is big and loose, but is rolled up at the elbows, and thus doesn't hang and droop as much as the sleeve in the previous example. 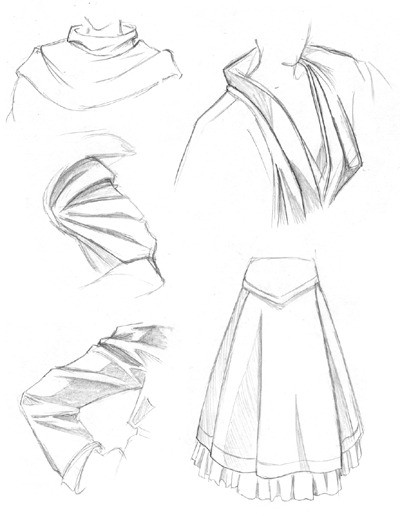 These are some miscellaneous bits of clothing that didn't fit into any of the other sections of this tutorial, but that I wanted to include anyway. In all these examples, try to identify where the cloth is being pulled towards and in what direction (for example, is it being pulled roughly towards the shoulder, or draping loosely over the subject?).
Always remember to shade wherever the light doesn't fall, such as grooves, areas inside the folds, and places where the cloth overlaps. 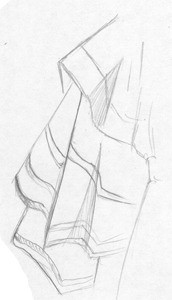 One small but important thing I would also like to go over before continuing is the effect that stripes can have. If you are drawing clothing that has stripes or a pattern on it, make sure that the pattern moves along with the rest of the fabric. Where the cloth bends, the stripes and patterns will bend, as well.
This can be difficult to draw and shade, especially when you are dealing with complex patterns, but it can add a really nice three dimensional look to your picture. 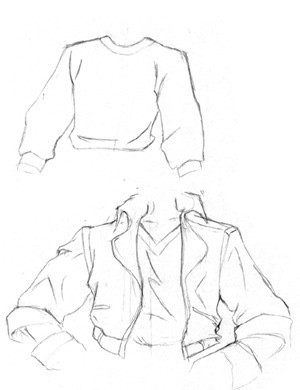 Now that we know some basic shapes and know a little more about how clothing should fit on your subject, let's work on the actual parts of your character's wardrobe. We'll start off by going over basic shirts. Whatever type of shirt you draw, there are some basic places where folds will occur. Sleeves will be stretched towards the shoulder. Fabric generally gathers and bunches up around the armpits and waistline. If you are drawing a character with a heavy jacket or a loose shirt, the fabric should be thick and baggy and full of folds and creases, while if it is a tighter fitting garment, the clothing will stick pretty close to your subject (which is why it is important to be able to draw bodies; I have found that you cannot always cover up your entire character with really loose clothing to hide the fact that you aren't very strong in figure drawing. ^_~) 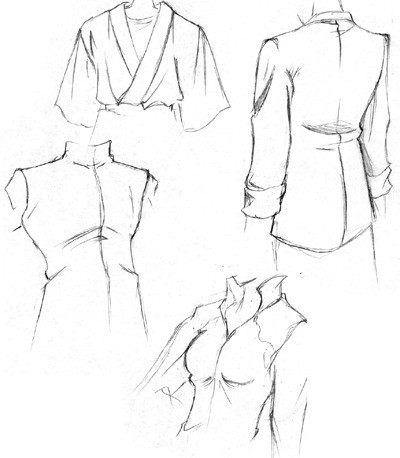 Here are some better examples of various shirts and clothing for the upper body. Notice that while some clothing fits closer to the body than other clothing, you still see many folds where ever the fabric is being stretched. Generally, you'll see folds the most at the armpits, upper portions of sleeves, waistlines, and depending on how tight the outfit is, the chest (as shown in the lower two examples). Also make sure that any seams that are visible on the clothing follow the shape of the cloth and the character that is wearing it. ^_^ 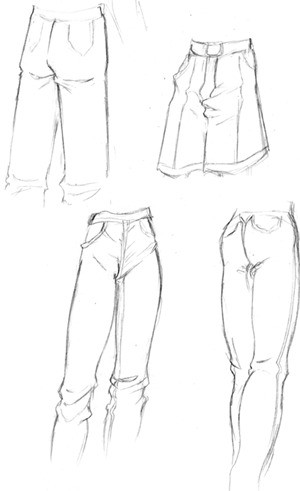 All right, let's work on the pants (something that I personally sometimes find a little daunting... ^.^;) I have noticed that guy's pants tend to be a little looser, while girl's pants cling closer to the subject. Also take note that female's rears tend to be more round, while guy's are tend to be flat and squared off (a rather strange observation, I know. ^_^;) No matter which gender you are drawing, the fabric will gather around the lower waist, knees, and ankles. The cloth around the upper and lower legs is generally pulled straight down by gravity and won't have too many folds, unless the leg is lifted up, in which case you'll have folds similar to the sleeves on the previous page. Here are two more examples of clothing for the lower body. The one the left is an example of really loose, baggy pants. The material is has more folds than normal pants, and in this case gathers at the ankles. Notice how poofy the pants get below the knees. The example on the right is just showing how no matter what you character is wearing, you need to consider the form of the figure beneath the clothing. In this case, the clothing is relatively tight, but hangs down past the knees, and thus is drawn a little tighter around the rear. Also notice how the loose fabric bunches up right above and below the belt. That concludes my tutorial on drawing clothing. It isn't the most organized tutorial, but I'm hoping that it covers enough areas so that it can been of some help to you. ^_^
0  Comments
This website uses cookies to store your preferences and improve the service. Cookies authorization will allow me and / or my partners to process personal data such as browsing behaviour.