Author: Pharaoh
6 Jun 2022
On November 4, 1922, archaeologist Howard Carter discovered the almost inviolate tomb of Tutankhamun, the Pharaoh who died very young. His importance to the Egyptian hystory is modest: he is remembered for having put an end to the Amarnian heresy, imposed by his father Akhenaten, but above all for the treasure found inside his tomb. 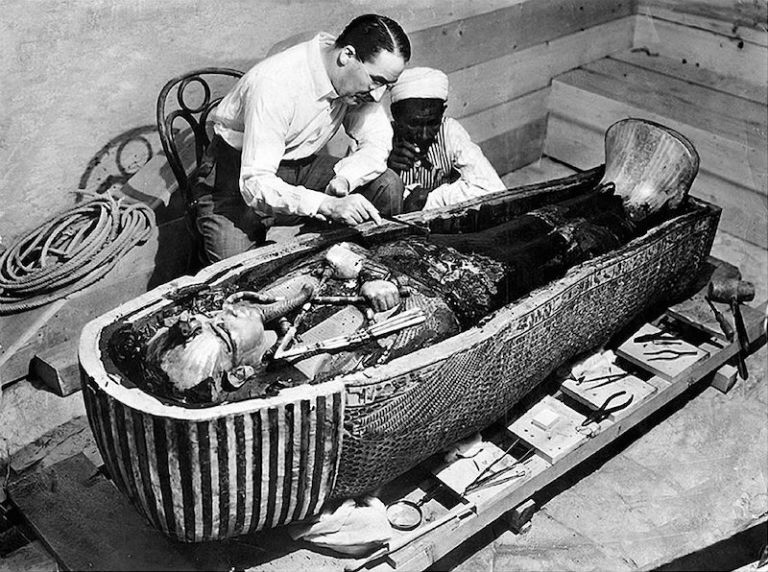 Howard Carter opens Tutankhamun's sarcophagus in 1922
Howard Carter entered the history when he shows the world the thresures contained in the tomb: the golden sarcophagus, the funerary mask and then jewels, precious caskets, alabaster vases and, among other things, a breastplate that does not arouse great interest at that time, due to the low amount of gold in it and for the presence of a winged scarab that supports a boat with the eye of Horus, and the symbols of the sun and moon. 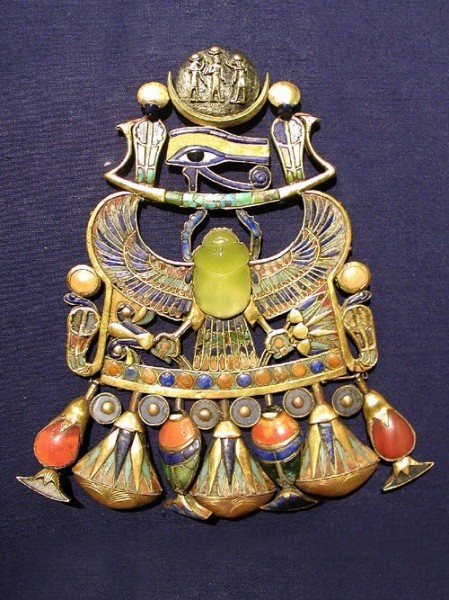 Tutankhamun's breastplate features a scarab carved in desert glass in the center
The breastplate is today exhibited in the Cairo Museum (Egypt), but visitors are of course attracted by more eye-catching treasures.

At the time of the discovery, Howard Carter believed that the scarab was made of chalcedony (a mineral quartz). 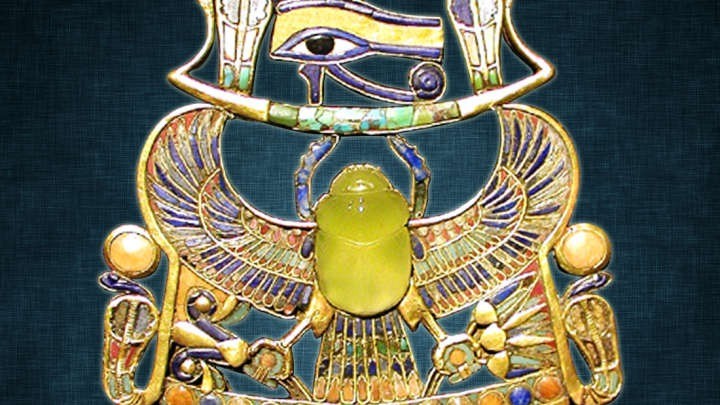 The scarab
In 1932, British geographer Patrick Clayton was exploring the Great Sand Sea along the border between western Egypt and eastern Libya. Here he discovered some strange pieces of glass in the sand. The yellow-green material appeared to be very similar to the gem found in Tutankhamun's tomb. 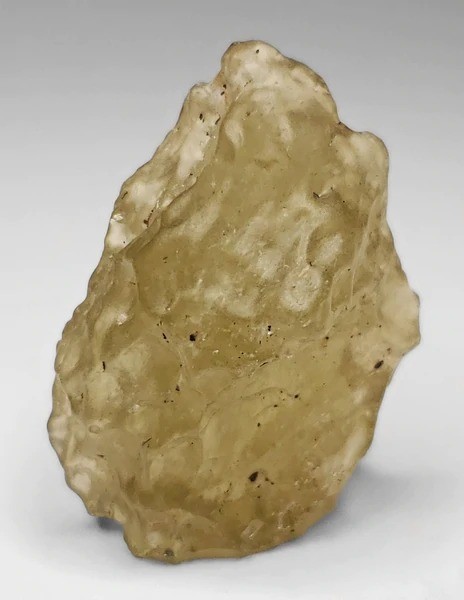 A fragment of the Libyan desert glass
Two years later he published a short note, suggesting that the pieces of glass were the quartz-rich deposits left on the sand after the drying up of an ancient lake. 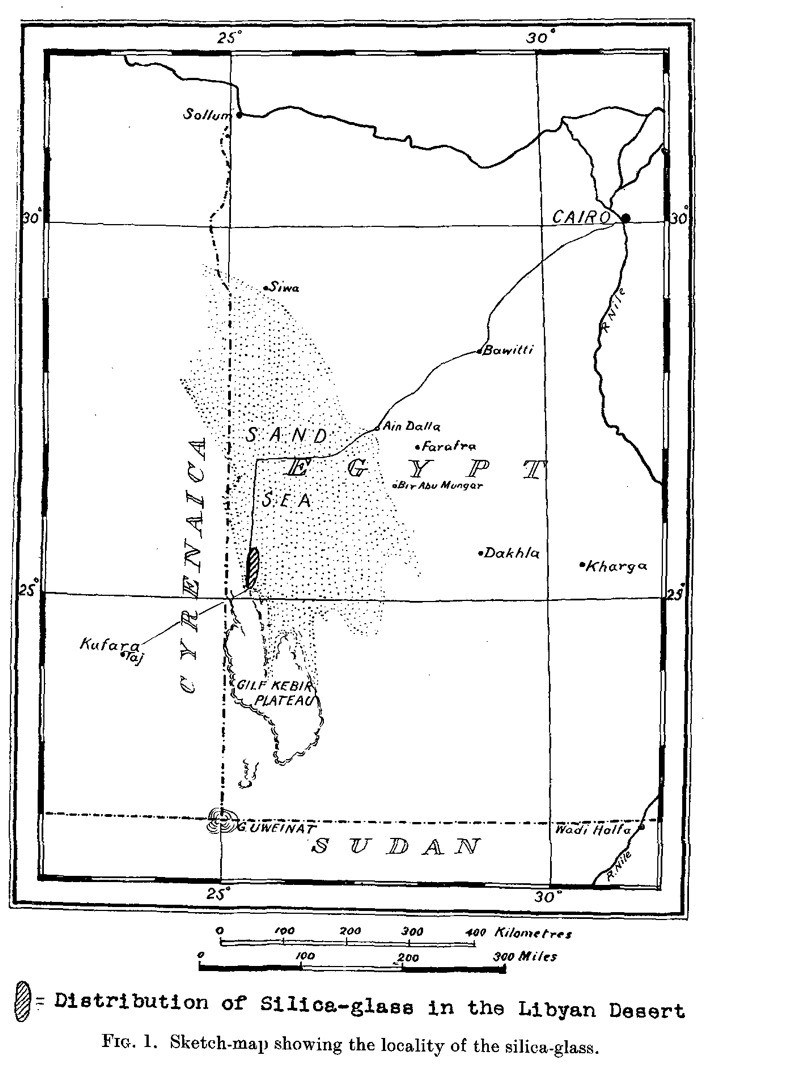 A map created in 1932 by Patrick Clayton during his geological researches, which highlights the distribution of silicon glasses in the Libyan desert
In 1998, the Italian mineralogist Vincenzo de Michele carries out studies on the scarab, and by analyzing the optical properties of the precious stone in Tutankhamun's breastplate discovered that it was indeed a piece of silica glass from the Libyan desert. The glass of the Libyan desert is made of almost pure silicon dioxide, like quartz, but its crystal structure is different. It also contains traces of unusual elements, such as iron, nickel, chromium, cobalt and iridium.

It is one of the rarest minerals on Earth, as it is found only in the great sea of ​​sand north of the Gilf Kebir plateau, one of the most remote and desolate areas of the Libyan desert. 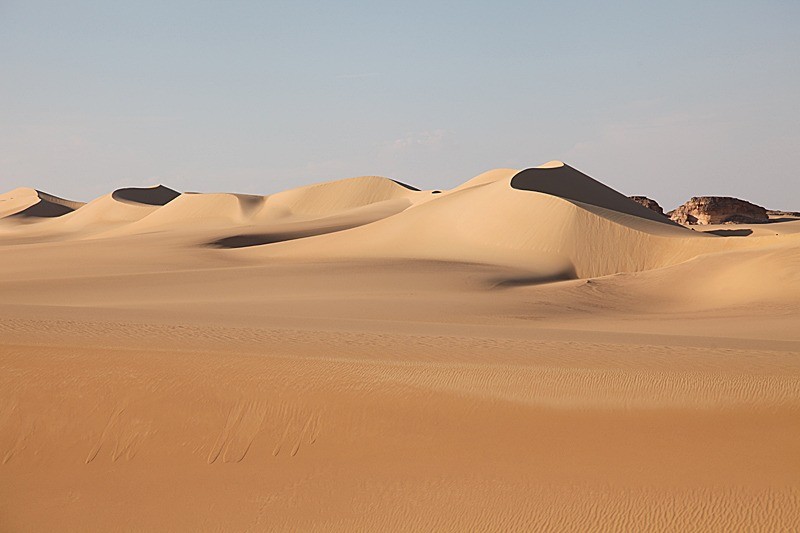 The Great Sand Sea is a sand desert in the Sahara between western Egypt and eastern Libya in North Africa.
The mystery of the formation of this particular glass in the desert remains to today. There are no nearby volcanos and no signs of a meteorite impact to justify its presence. Obsidian and tektite, for example, are glassy materials produced by volcanic lava and meteorite debris, respectively.

Some scientists speculate that a meteorite, which entered the Earth's atmosphere, could have exploded in the air above the desert, bringing the temperature to around 2000 degrees, enough heat to melt the sand, which would have formed the glass.

But recently it was discovered that inside the desert glass there are tiny zircon grains originating from an extremely rare mineral, reidite, which is formed only as a result of very strong pressure, impossible to obtain with an explosion up in the air. Only the impact of a meteorite, or the nucleus of a comet, with the sand can cause a temperature e pressure conditions sufficient to form the reidite.

It still remains to find the point where that meteorite hit the desert.

guest
29 Nov 2022
Wow that was odd. I just wrote an very long comment but after I clicked submit my comment didn't appear. Grrrr... well I'm not writi ...

guest
6 Nov 2022
+ORC valued freeing knowledge, world-wide cooperation, and anti-capitalism. He believed in the power of people to work together and break ou ...

AniphaeS
4 Nov 2022
Thanks :)
This website uses cookies to store your preferences and improve the service. Cookies authorization will allow me and / or my partners to process personal data such as browsing behaviour.