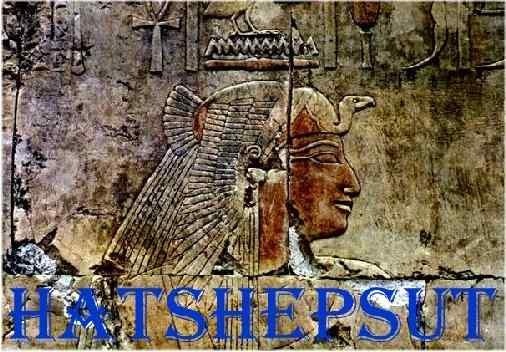 He had not been a great Pharaoh and he had done nothing to be remembered. A mediocre warrior, he hadn't even built great monuments. Egypt would not long mourn his death.

But he had died too soon!

The heir to the throne, the son Dhutmose, was just a boy and his right to the throne was not unassailable. To explain this fact it is useful to open a parenthesis and give some brief information on the history of the XVIII Dynasty.

In the first century after Christ, the Roman historian, of Jewish origin, Josephus, in his work Contra Apionem, claims to report a text written by the Egyptian priest Manetho in the third century BC. and writes:

"... from the eastern regions an unknown race of invaders marched against our country sure of victory. With the strength of their numbers and without a shot being fired, they easily took over our lands and after defeating the sovereigns of the country they set fire to mercilessly our cities, razed the temples of the Gods to the ground and vented their cruelty against the inhabitants, massacring some, enslaving the wives and children of others ...

Then they elected one of them named Salitis king. He placed his capital in Memphis, imposing taxes on Upper and Lower Egypt ... "

With the data that are now in our possession and after having analyzed everything that has been possible to discover about the period, the humiliating foreign occupation that has been possible to read in Manetho's account contains truth and falsehood in equal measure. It is quite frequent, and not only in Egyptian history, that a period of desolation and anarchy is painted with highly melodramatic and apocalyptic tones, and this usually to glorify the monarch who was responsible for the salvation of the territory. Indeed, it is not very credible that a horde of invaders descends the Delta like a storm wind and occupies Memphis, inflicting all sorts of cruelty and wickedness on the people. The very few documents that have come down to us about the hyksos kings show us a desire to reconcile their different customs with those of Egypt. Furthermore, they immediately adopted the hieroglyphic writing, Egyptian customs and habits, the title typical of the pharaohs and had begun to worship the gods of Egypt (although they preferred among all the god Seth, brother and murderer of Osiris, whose name they transcribed in the Babylonian form Suteck and to which they soon gave characters and clothing that made him resemble the Semitic god Baal). The assertion that they obtained tribute from above as well as from Lower Egypt is very doubtful. As we have seen, the idea that the Hyksos rulers occupied the entire Egyptian territory is a forgery that has been definitively disproved by a large inscription by Kamose, which clearly specifies that the invaders never advanced beyond Gebelen and that they positioned their lower borders. to Khmun. Other findings, on the contrary, prove that the princes of Thebes have always maintained their autonomy and full possession of their territories, even if for a short period they had to accept the subordinate position of vassals.

However, the Hyksos dominion had important cultural and technological implications on the civilization of Egypt. The most important was the introduction of the horse and the horse-drawn war chariot which later played a very important part in the subsequent wars of conquest. A new type of daggers and swords, bronze weapons, and the mighty double-curved Asian bow are the other benefits derived from what was always considered a national disaster by the Egyptians.

But the princes of Thebes could not stand the presence of the Hyksos and began what was presented as a war of liberation. Begun under Prince Kamose, it was concluded by his brother Ahmosis, who later became the first pharaoh of the XVIII Dynasty.

This dynasty gave Egypt some of the greatest pharaohs in history, including that of Thutmose III (the Dhutmose of this story). But he was the son of a secondary wife of Thutmose II (probably Ese) and therefore was not entitled to the throne.

In the Egyptian court the queen could take on two very different roles:
Only the children of the "Great Royal Wife" were entitled to the throne.

When no male children were born from this union, it was traditional to marry the male heir with the half-sister, in a sense the legitimate heir.

Thutmose II also had only daughters, two to be exact, from his "Great Royal Wife" Hatshepsut. And when he died, his son was still too young to marry his half-sister.

Not legitimated to the throne and in any case too young to rule, it was automatic that his stepmother assumed the regency.

But Hatshepsut was no ordinary queen!

Hatshepsut must have been around 15 when she was forced to marry her stepbrother Thutmose II. She will always declare that she is the legitimate heir to her throne, as her father had designated her to succeed him since her birth, but her marriage legitimized her rights to her brother's throne.

Not even the birth of the first daughter improved the relationship between the two spouses, as she once again proposed the dilemma of succession.

When the queen turned 30, to celebrate this important event, she thought of performing an act of extreme gravity:

the erection of two large obelisks in the temple of Amon in Karnak (it was traditional in fact to erect two obelisks to celebrate the feast that was called the Jubilee and which took place when the pharaoh reached the 30 years of his reign).

It was not possible to know what problems prevented the construction of the work, but the two unfinished obelisks are still found in the quarries of Aswan.

This act emphasized once again that Hatshepsut considered herself the legitimate ruler of Egypt and that, in her opinion, Thutmose II was at best "a prince consort".

In this context, the birth of a second daughter appears quite strange, considering the animosity that characterized the relationship between the two spouses.

Shortly after there was the sudden death of the pharaoh. It is possible that he was murdered by the queen, but the attitude that Hatshepsut always maintained towards her stepson does not make this hypothesis very likely.

Regarding the succession, a compromise was reached: Dhutmosi (with the name of Thutmose III) would officially be the king and Hatshepsut the regent. It is however interesting to note that the royal title "Menkheperre-Dhutmose" began to appear on all the monuments, but always in a secondary position with respect to that of the stepmother, also expressed in the royal cartouche "Maatkare-Hatshepsut".

AniphaeS
20 Sep 2022
It looks like a big church Is it christian?

AniphaeS
12 Sep 2022
It was too sweet, next time I need to try with the raw green mango instead of the mango pulp

Francesco
11 Sep 2022
I've never tried it, but it looks delicious :)
This website uses cookies to store your preferences and improve the service. Cookies authorization will allow me and / or my partners to process personal data such as browsing behaviour.